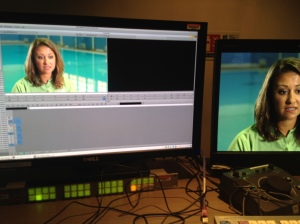 Note: Due to NBC’s and the IOC’s social media/blogging policy, I am not able to release these posts until after the Olympic Games end. But these posts were written during my time in London and all thoughts are my own and do not reflect those of neither NBC nor the International Olympic Committee.

When we got this gig, we knew that we’d be working at 12-hour days for seven days a week. When you put the numbers together, that’s an 84-hour work week. And after a slow first couple of days, things finally started to pick up on our first Saturday in London.

Today, we logged interviews and b-roll for this story about a seven-year-old boy named William who is using swimming as a way to overcome the obstacles that he’s had to go through in his young life. He took up swimming when he was four after almost accidentally drowning. He said he wanted to be able to save his own life and others. There’s also some tragedy involved in this story as well. A few months ago his dad was shot and killed.

The Olympics connection exists here: he swims at his local Boys and Girls club in Tennessee and got to meet his idol, Michael Phelps. He says that meeting him has inspired him to be a better swimmer and his swim coach has seen those results almost immediately.

I had to log some of the interviews with William’s mother and swim coach and it opened up my eyes a bit on how difficult it is to do an interview, especially when the subject is surrounded by hot lights and a whole production crew. You can tell how uncomfortable both his mom and swim coach was because their respective interviews had to be stopped multiple times because the subjects tried so hard to give a good answer. As I am sitting there watching the interview, I already have an idea of what soundbites they plan to use, probably because the good, let alone usable, soundbites were few and far between.

Watch the story about William and how Michael Phelps looks to increase water safety here.

In the edit room that I am working in, the producer and editor is working on another piece about an American triathlete who is also an accountant and didn’t start competing in the sport until 2010. After I logged the interviews for the swimming story, I sat and watched as David, the editor, and Jay, the producer, finished up the piece, which used a lot of moving still photos and cool effects.

Watch the unexpected story about the triathlete (and accountant), Gwen Jorgenson,  here. Her first professional triathlon was two years ago.

NBC uses Avid (Media Composer 6 for those wondering) and it was great to see a whole company that broadcasts stories from the Olympics to an entire nation use the same editing software that a small student-TV station uses. Learn as much as you can and learn as many editing techniques as possible. It’ll help out in the long run.

The department had its first meeting for the London Games today and I got to see for the first time how many people are involved with Sports Desk. From its talent/correspondents like Lester Holt and Michelle Tafoya to producers like Jay and Stephanie, to crew members, production assistants, and interns, it takes a team to operate such a big event like the Olympics. As corny as it sounds, being a part of that meeting made me proud to work in Sports Desk and I was looking forward to the days and weeks ahead.