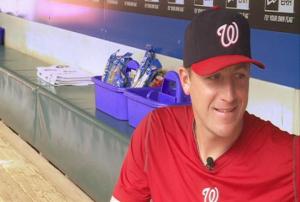 In a small market, it’s not every day you get to talk to a Major League pitcher. So when the Nationals visited Milwaukee, I kept an eye on when Jordan Zimmermann would be pitching and circled that on my calendar.

Zimmermann is a native of Auburndale, WI, less than an hour from Wausau. He also was a stand-out at UW-Stevens Point. His story basically screamed “Central Wisconsin”. It’s what every local station loves, a small town athlete who goes on to do big things.

Zimmermann actually pitched the Friday before I interviewed him. But I figured I’d skip the big media circle that would develop around him after he pitched and find him two days later. The wait paid off.

Interviewing someone one-on-one is totally different from a post-game interview. It’s relaxed, laid-back and the subject often tells you a lot more than he would with numerous cameras around.

I should probably note, I went down to Milwaukee alone. With two cameras. I manned a two-camera shoot by myself. It’s not easy. Every time I asked a question, I always worried about how the shot looks instead of actually paying attention to what Zimmermann was saying. But I’m glad the interview worked out. When I mentioned that I got 12 minutes with him to MASN’s sideline reporter, she was surprised.